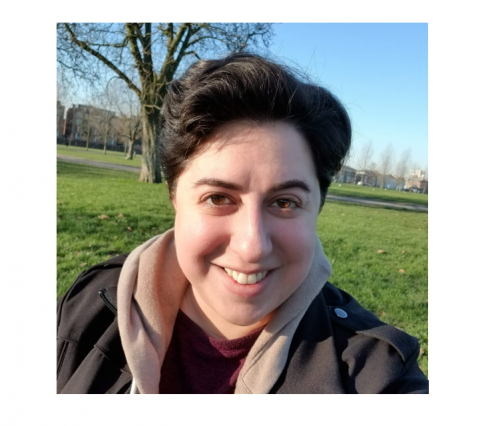 Dr. Dainy Bernstein (ey/em/eir) is a Visiting Lecturer in Pitt’s Literature program. Ey is editor of Artifacts of Orthodox Jewish Childhoods (Ben Yehuda Press, April 2022), a collection with essays by both scholars and laypeople, reflecting on toys, songs, books, etc., used by or given to Orthodox Jewish children, including Modern Orthodox, ultra-Orthodox, and Hasidic. Recently, Dr. Bernstein gave a talk for Pitt’s Children's Literature Program, presenting eir work on the Olomeinu/Our World magazine, published by Torah Umesorah (the National Society for Hebrew Day Schools) and distributed to Orthodox children from 1945 through 2011. Currently, ey is working on mapping the locations named in the features and stories of the magazine in order to build an image of what the child reader's concept of the world would have been at each stage of the magazine's run.

The following interview was conducted as responses to written questions and has been lightly edited for clarity and length.

When did you begin teaching in Pitt's literature program? Which are the courses you typically teach?

Fall 2022 was my first semester at Pitt as a Visiting Lecturer in Literature. I'm happy to be teaching two of the same courses in spring 2023: Imagining Social Justice and recitation sections for Children and Culture. I also taught Science Fiction in the fall, and I am teaching Exiles, Nomads, and Migrants in the spring.

I began graduate school as a medievalist, after writing my undergrad senior thesis on French and Welsh Arthurian legends. At that point, I was unaware that studying children's literature was even an option! During my first semester, I took a required interdisciplinary class for the Medieval Studies certificate in which we read a wide range of texts, and I kept returning to ideas of childhood. In my second semester, topics in another medieval lit class got me interested in medieval Jewish prayer. Later on, a class on medieval conversions got me interested in medieval Hebrew poems and chronicles about the effects of the Crusades on the Jewish Ashkenazic community, and I wrote a seminar paper exploring how these texts speak to and about teenage boys. I planned to write my dissertation about the ways different genres of medieval literature portray education and socialization, but by then I was already itching to write about contemporary children's literature. At that stage, I was also doing some research "on the side" about the Orthodox Jewish books I had grown up reading. My advisors encouraged me to change topics and focus on contemporary Orthodox Jewish children's literature - and that's how I got to where I am now!

Would you speak about your approach to teaching, maybe by sharing a bit about a recent course--its texts, concerns, assignments, projects, etc.?

My general approach to teaching is to front-load the semester with direct instruction on critical reading and writing skills, and to gradually become more hands-off and let students direct the conversations in class and have semi-free rein in developing their own projects as the semester progresses. I like to start most classes with close reading, asking students to read a single text through the overarching questions of the class. I take students through the process of proposing a question, formulating a thesis, drafting, and editing for that first paper. The second paper usually incorporates more research and/or comparison between texts in order to think about a bigger thematic question, and the final project asks students to synthesize the themes of the class by working on a creative/artistic project. The goal of this trajectory is to help students become confident in their ability to engage with texts and express their thoughts about the course's topics and themes.

Was there a teacher, mentor, family member, event, book (or some combination thereof!) that shaped your thinking, teaching, and your desire to study literature professionally?

My family was a reading family, though I had to hide the books I wanted to read as I got older since they were also a very religious family. I attended strict religious schools from kindergarten through high school, and going to the public library was frowned upon in high school (I went every day after school anyway). In some ways, I think that having to fight for my right to read whatever I wanted, especially since reading was often an escape for me, deepened the interest I already had in books. The power of books to shape a young person's mind was always emphasized in my family and school (particularly when it came to banning Harry Potter, for example). So I grew interested in that idea, in the power of books and in adults' attempts to control - for good or bad - what kinds of books their children read. In college, my mentors Elizabeth Mazzola, Mikhal Dekel, and Dan Gustafson at the City College of New York encouraged my thinking about literature and culture, and eventually they helped me realize that I wanted to go on to graduate school to continue studying this.

Do you have a project on the horizon that you are excited about and would want to share here?

What are some of your hobbies/interests outside of the literature program/university life?

I got into bullet journaling at the start of the pandemic, and I love spending time planning and creating pages. I also dabble in needlepoint, hook rug, and felt art.

I'm working my way through all the unread books on my bookshelves. I'm about to start Tamora Pierce's Trickster duology, Trickster's Choice and Trickster's Queen.