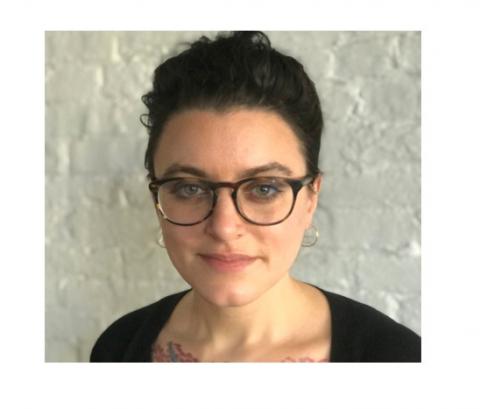 Dr. Caro Pirri (she/her) is Assistant Professor of Literature focusing on Early Modern Theater History and Culture. Her most recent article, which is drawn from her upcoming book, is “Unsettling The Tempest” in Renaissance Drama. She will also release a podcast episode on early American colonialism and English literary modernity in the next year as part of Pitt’s Genealogies of Modernity Project.

This interview was conducted via responses to written questions.

When did you begin teaching in Pitt's literature program? Which courses do you typically teach?

I began here in 2020 in the middle of the pandemic. I got the job offer in February right before lockdown, so I was able to have in-person meet ups with folks before beginning my remote teaching, which gave me a great introduction to the department. My most frequently taught class is Intro to Shakespeare. I generally teach classes on Shakespeare, but this fall I’m teaching my first graduate class on catastrophe narratives in American literature. I’ve been inspired by the Genealogies of Modernity Project to think more about the kinds of literary genealogies that I create in my classes, so I hope that this class will get students thinking about the long durée of eco-imperialism. Early modern conquest narratives, if read critically and in dialogue with modern criticism, have a lot to contribute to that conversation. I’m excited!

I would say that I tend to teach classes at the intersection of Renaissance theater history and cultural studies. This is also true of my research. I’m invested in showing how early modern theater was crafting arguments about the relationship between people and institutions (from early merchant companies that funded England’s imperial projects to theatrical institutions like The Globe). These relationships can look different than the forms of belonging or identification that we recognize as modern people, and my goal is to capture those differences even as I’m identifying structural similarities.

I was a graduate student actually and was in two classes, one on Early Modern Theatricality, taught by Henry Turner, and one on New World literature, taught by Chris Iannini. I remember reading an early catastrophe narrative, Ralph Lane's Roanoke account, and wondering why these narratives of colony collapse and imperial weakness were so central to the story early Americanists were telling about conquest and yet were missing from stories of that same period in early modern studies. Language isn't a transparent medium for communicating something like a "discourse" of imperialism. In fact, more often than not, it shows us this record of imperial fragility and reveals a link between failure and violence. It reveals an early version of reactionary political violence happening in our own moment which is just as linked to a white settler context. Once I came to understand this, I was able to see the way that early modern literary writers were metabolizing this history in their own way, even in texts that didn't seem explicitly linked to an American context. Methodologically, critical juxtaposition (the reading side-by-side of literatures belonging to different disciplinary, linguistic, or cultural traditions), continues to be important to my work and my teaching. It was so formative for me in my graduate study for helping me think outside of disciplinary idioms.

I often talk in my classes and research about how institutional belonging and structural literacy (the ways people talk about and reflect on their relationship to larger forces) is an inherent part of theatrical interpretation. Theater always asks us to infer a larger represented world from what we see in front of us onstage. It can be difficult to get students to think about literary form – about how something is said or presented rather than just what is being said or presented. But I find that introducing them to the material conditions of performance in all their strangeness can help them do that work. I often do this by asking them to think about how the presentational conditions (what is shown) change our understanding of what is represented. The Pitt library has a subscription to Digital Theatre + which has been so helpful for this work as it exposes students to different casts and settings for Shakespeare.

Would you speak about your approach to teaching, maybe by sharing a bit about a recent course--its texts, concerns, assignments, projects, etc.?

I design my classes to encourage students to rely less on their received ideas about big structural categories like race, gender, and religious difference and begin to see that these categories are being actively constructed in plays toward a certain end. In my “Shakespeare and Social Justice” class, for instance, I asked students to think about social justice, not in terms of persons, but in terms of institutions. Modules focused on restorative vs retributive justice, racial gaslighting in its interpersonal and structural forms, gender-based violence in social movements, and historical and contemporary ideas about “citizenship.” I think that talking about the contingency of identity and representations of different identities can defamiliarize their understanding in a useful way and point them to contextual motivations, systems, and processes of justification that undergird these representations in their historical and modern versions. I often use hybrid creative and analytical assignments to do this. An example of this is when a student came to an understanding of how Iago was using racial gaslighting by creating a D&D campaign in which Iago was both the DM and a character in the campaign. I think it’s useful for students to articulate their own assumptions without placing pressure on them to just reproduce institutional languages.

Was there a teacher, mentor, family member, event, book (or some combination thereof!) that shaped your thinking, teaching, and your desire to study literature professionally?

Emily Bartels at Rutgers, where I did my graduate work, and Dan Gunn at the University of Maine, Farmington, where I did my undergraduate work. Dan taught me to close read - full stop! Emily taught me that all contexts are themselves created and canonized through scholarship. She encouraged me to challenge context and to actively construct it rather than accepting a received version of history. This was a profound realization for me as a scholar and a teacher.

Are there organizations or groups of which you are a member or that you lead that you would like people to know about?

No scholarly organizations other than the Genealogies of Modernity Project! Outside of the academy, I do work as an activist with the Abolitionist Law Center here in Pittsburgh as a court watcher. We’re always looking for more people willing to hold the courts accountable. People with clerical skills, free time during the day (to watch court) and the ability to analyze and close read legal speech are a plus, and there’s many to be found in our department!

What are some of your hobbies/interests outside of the literature program/university life?

I’m an avid video gamer. You might seem me bumbling around the Cathedral in a Mass Effect or Elden Ring t-shirt during the summer (I’m also up for co-oping with people on Xbox Live!) I also table game with other folks in the department (convene the nerds!)! My other main hobby is translation. I like translating Italian short stories and Latin poetry. Right now, I’m working on translating Dino Buzzati’s short story collection Sessanta Racconti.